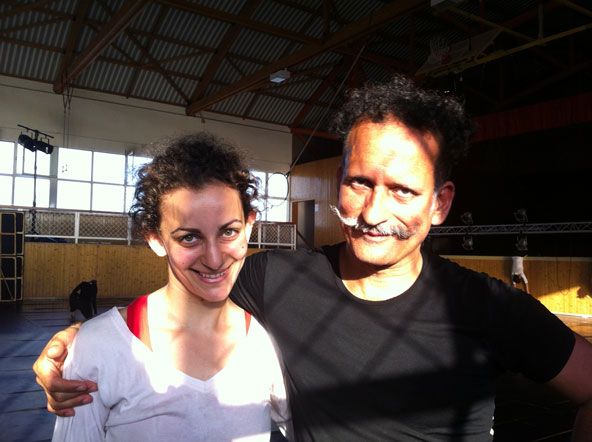 Deltebre Dansa Festival is a unique event founded by Roberto Olivan artistic director of Enclave Dance Company. Each year around 150 dancers from all parts of the world gather for two weeks at this beautiful location outside Barcelona. They take part in the most intensive and amazing workshops given by internationally acclaimed teachers. In 2012 I realised one of my dreams and was able to take part.

My experience at Deltebre Dansa was a catharsis (from the Greek κάθαρσις Katharsis meaning “purification” or “cleansing”). You leave it with feelings of freedom, pride, joy, sadness, strength and confusion but most of all you are released into the world with a clear mind and an enriched body.

During the two weeks you constantly feel a mix of emotions and push yourself to the extreme, mentally, physically, and spiritually. Every day you reach a limit and then exceed it. You realize the teachers, the dancers, the facilitators are there to share their personal journey with you. Everybody wishes to learn, to juxtapose, to challenge, to explore, to laugh, to cry, to rebel, to compare, to accept, to befriend, to help, to support.

We are separated into 3 groups with an average of 60 dancers in each one. Thirty five different nationalities are part of the festival. Because of that you see a new face everyday. I was in the blue group. The first week Tono Lacky from Les SloVaks was our last class for the day and in the second week, David Zambrano. It was quite a challenging schedule.

As Zambrano advised us, we needed to make choices and decide which classes we wanted to attend and then to devote ourselves. “From too much eating at the end you throw up.”, he says with sense of humor. With one word “Continua” he keeps us in perpetual motion. Up and down through a passage of bodies trying to avoid collision and crush. Spirals into the floor and out again taking everything and everybody with us. We are learning to fly low.

Tono’s style of teaching reminded me of the Shaolin movies I liked as a child. There were so many of us, all different ages and genders but still without exception we ran, nodded, jumped and gathered around him on command. In the beginning the speed was unattainable! The tempo hard to follow. Our brains confused by the order of the movements.

The middle of the week was usually hard. Thursdays were better. It was rare to see Tono smile. We would hear him say “It’s coming”. Those who followed the classes until the Friday felt the change, the movement started to look manageable. It was time to enjoy our progress and a smile from Tono !

We started to realize we could become “super human” as we pushed our limits and discovered our untapped potential. It was a fine line though. The stress on our bodies and minds was high. In the middle of the first week I realized it was important to leave a recovery gap from both a mental and physical point of view. It was a crucial decision that allowed me to maximize the learning from the classes I chose. I noticed some of the participants already knew that from their previous years. Most of them even had programs they followed. Deciding which class to drop was difficult though with so much quality on offer.

Martin Kilvady started a class by making us lie on the ground. Fifteen minutes of solitude in a room full of people. He guided us with his voice so we could recover some energy. Then step by step he built up the tempo through different improvisational tasks. Catching details of the music, surprising ourselves, feeling like we’re missing something, holding then letting go. We hear him say “Play the game, don’t let the game play you.”

He has a gift to put you in a certain place where you can explore your creativity and ability. He simply lands you with the tools for discovery. I haven’t met many people who can accomplish that. The last minutes of the last class were filled with gratitude and applause. Still looking calm, he smiled.

I looked forward to the partnering class with interest. The tutors were Laura Aris and Jorge Jauregui. The synergy between them while they dance is a delight for the eye.
The first day I danced the male role and it was difficult. On the second day I was determined to find a male partner and chance was on my side. Not only did I find one but we happened to compliment each other well.

We survived. Even more, we stretched the limits of time, speed, creativity, habit, friendship, love, movement. We expanded our knowledge and left hungry for more.

People said that the experience lasts until the following year. You feel charged. That the memories release positive energy to keeping from despair or stagnation. It’s true.

I dream I will be back, drawn again into two weeks of unlimited possibilities.