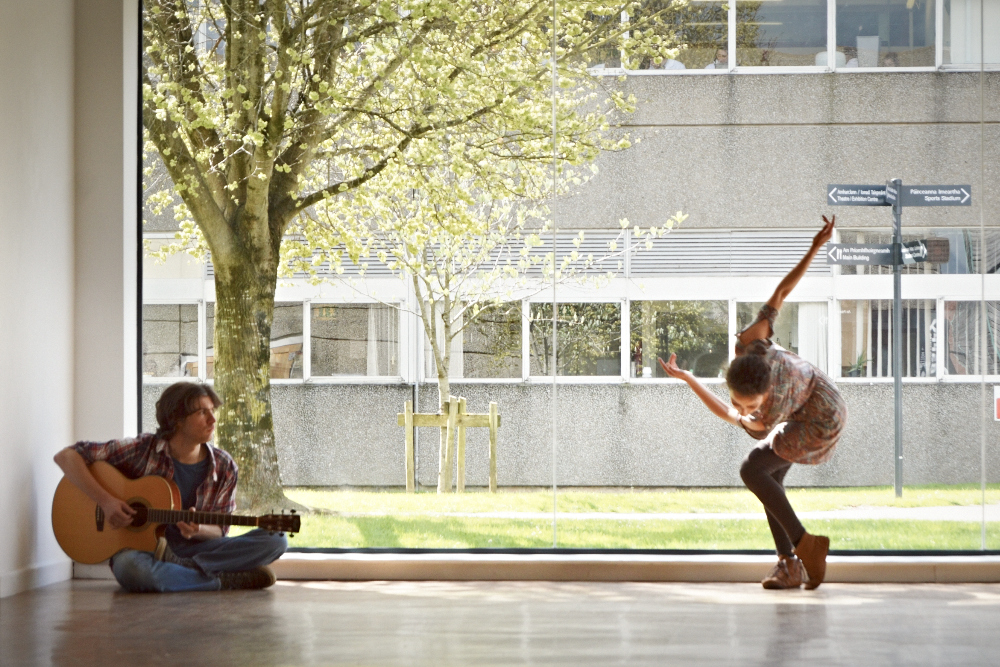 International Dance Day took place on the 29th of April this year. It is celebrated worldwide with events ranging from simple workshops to lavish performances. All seek to share the awareness and joy of one of our most basic and sophisticated forms of expression and communication.

For the last couple of years I’ve had an idea to create a dance piece celebrating the occasion but until now I couldn’t find the right form. This year I was invited by the CIT Arts Office to devise a series of “pop-up” performances around Cork Institute of Technology. After touring the CIT Bishopstown Campus it became obvious to me that the buildings and facility offered a lot of scope to create something ambitious, interesting and accessible to all.

The time and location of each performance wasn’t announced in advance. Simultaneously with each performance there was a short film of me dancing in that location streamed to screens around the campus with visual clues to identify the live location. The text “Find Me, Find Your Groove” was overlayed on the streaming film. This encouraged onlookers to find the performance and in a way was analogous to finding your own way to move.

Having live music during performances has become a trade mark for me as a choreographer. It was an immense pleasure to perform next to the talented musicians Philip, Roddy, Hazel and Fotini and to share the joy of dance with the students and staff in CIT. I felt each musician inspired a different story in my being and way of expression. I’m very grateful to Kevin Touhy, Louisa Sloan and CIT Bishopstown for hosting and organising the event.